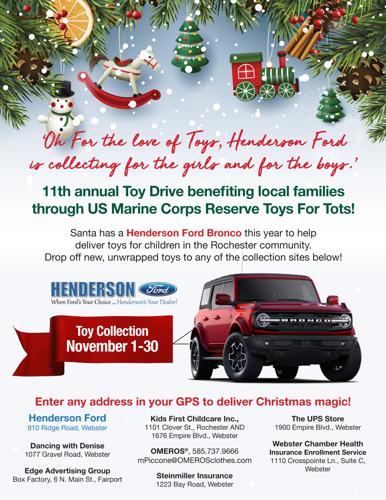 This event has passed

Oh for the love of toys

Henderson Ford is collecting for the girls and the boys

ROCHESTER, WEBSTER, PENFIELD, IRONDEQUOIT, FAIRPORT, BRIGHTON, PITTSFORD, ONTARIO, NY –  Henderson Ford is celebrating its eleventh annual toy drive this year, hoping to fill a Bronco full of toys! The dealership and collection partners will be accepting donated toys for the annual US Marine Corps Reserve Toys for Tots campaign. New, unwrapped toy donations can be dropped off at any of the locations listed below, throughout the month of November.

Enter any address into your GPS to deliver Christmas magic:

Henderson Ford President Randy Henderson said, “We have continued this effort with the US Marine Corps Toys for Tots because they give back to children and families right here within the Rochester community. Coronavirus has made these past couple of years difficult for people and we are thankful that our partners and the community at large are helping to collect toys to brighten the holidays! Please consider getting an extra toy, game, book – anything during your holiday shopping, that can be passed on to local families.”

Located at 810 Ridge Road in Webster, Henderson Ford is part of a rich Ford tradition which has been serving the greater Rochester area for more than 40 years. The Henderson family has served Webster and its neighboring communities for the past 24 years. The dealership has been a leader in government sales in New York State and in the nation. Also, Henderson Ford was in the Top 10 of the Rochester Top 100 twice – holding the number 2 and number 9 positions in recent years. Ford Motor Company has recognized the dealership in their Salute to Dealers awards as one of sixty-five international awardees, honoring their community service work. This award has placed Henderson Ford in the top one percent in the world, being recognized for community service work among Ford Motor Company dealers. Locally, Henderson Ford has been consecutively nominated by the public and has earned WINNER placements in the Best Auto Dealer and Best Auto Dealer Service Department categories in Rochester, honored by the Rochester Business Journal and The Daily Record Reader Rankings Awards.