You have permission to edit this article.
Edit
Advertise
Digital Editions
Sections
GVPSJobs
Classifieds
My Hometown
Share With Us
1 of 2 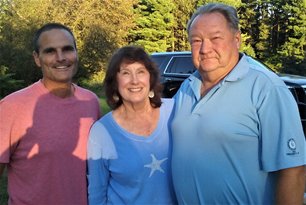 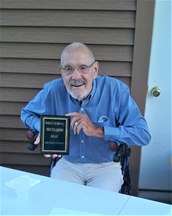 It might not have been the big banquet they deserved but the Sodus Chamber finally got to present gifts to Joan and Tom Miller as Citizens of the Year for 2019 and Bill and Sandy Bishop from the Sodus Cold Storage for the Milestone Award.  An open-air meeting of the Chamber was held on Sept 3 with over 25 members attending, wearing their masks, and staying 6 feet apart.  This was the first meeting since Feb due to the Covid 19 shut down.

Joan and Tom Miller were selected as citizen of the Year since both are, and have been, very active in the community.  As a retired teacher and school administrator, Tom continues to share his love of math and numbers by tutoring several students from Sodus and surrounding schools.  He also coaches various sports and is on the Sodus Recreation board.  He also serves on the Board of Directors for Reliant Credit Union.  Joan tutors’ adults though the Literacy Program and serves in many capacities for Pines of Peace and is responsible for the successful Pines of Peace Artrageous fund raiser.  She also serves on the committee for Family Promise.  Both are very active members of the First Presbyterian Church and they do all of this quietly and without fanfare.

The Sodus Cold Storage was selected as the Milestone recipient.   It was founded in 1914 as a “storage for vegetables” including celery, carrots, and onions that were grown on the local muck land. In the mid 1930’s the Storage was experimenting with Cornell University using controlled atmosphere units.    After working for the company for several years, Bill Bishop, Jr. bought his father’s stock and became president of the company in 1970.  Bill and Sandy Bishop own a majority of the shares of stock and Sandy now serves as President of the company with Bill as the Chairman of the Board and historian of the company.   The facility has expanded and includes several buildings where products are stored for many companies.   It stands as a vital part of the Sodus community as it continues to grow and expand with the times.

The Scholarship raffle was still conducted even without the banquet being held.  The Community showed their generosity by contributing $1235 so the Chamber could award one $500 Erie Piekunka scholarship and two $300 scholarships to graduating Sodus Seniors.  This brings the total raised to $24,517.

Other business conducted at the open air meeting was a review of the items the Chamber has done during the shut down which included the installation of outside brochure boxes for hard copy business directories at the Sodus Village Hall, the Sodus Point Village Hall, and the Information booth at Sodus Point.

The Chamber and School will again partner with Sodus High School to do a “Paper” Career Day for all high school students.  In the past the career days were a success for the students who had a chance to talk to various vendors.  That not being possible this year, vendors are being asked to submit information pertaining to their business such as what subjects are needed and what the starting salaries might be.  Packets will be put together and given to all the high school students.  Tote bags and raffle prizes will be award to each grade supplied by the Chamber.

Plans for the October meeting are still not finalized at this time.  The annual meeting and election of officers will be held in November at Nick’s Family Restaurant.  For more information you may call the chamber at 315-576-3818 or email chamber14551@yahoo.com