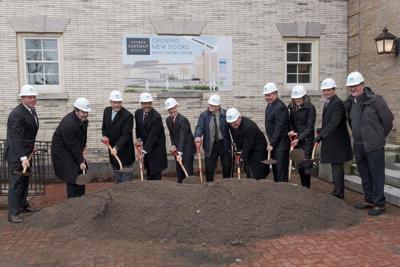 Barnes introduced Thomas Tischer, the visionary benefactor with whose name will grace the new Visitor Center. Tischer has been involved with the museum for several decades. In 2012, he perceptively suggested to Barnes that the parking area adjacent side of the museum would be a more appropriate location for the main entrance.

In 2017, Tischer donated funds to the museum to hire an architecture firm to draw up some tentative project plans and he committed to providing an additional one million dollars in matching funds for the project if the museum were to receive a $1 million grant  from the NYS Council on the Arts. It did.

Seated on the stage with three other guests, Tischer was at once inspiring and disarmingly humble. “You may wonder, ‘Who is this person?’ because my name hasn’t appeared in the newspapers or anything,” he said modestly. Originally from Wisconsin, Tischer received his PhD in Organic Chemistry before applying for a position halfway across the country at Eastman Kodak.

As a high schooler working at chemist store, Tischer saw several  representatives from different companies try very hard to get their products on the shelf, but the man from Kodak, “just simply sat down in a chair, opened his book and said, ‘Well, what do you want?’”

“I came to realize that Kodak at that time was a leader in its field,” he said.

Tischer began reading about George Eastman. “I said, ‘You know, now there was a fellow to admire,” he explained. In 1961, Tischer took a position at Eastman Kodak in Rochester, remaining until he retired.

“All the young kids…are amazed at the concept, but yes, that was it,” confirmed Tischer. Eastman Kodak continues to stand as a local legacy with its impressive history, industry-defining innovations in the field of photography and its world-class collections. Tischer felt that “it would be nice to have some accomplishment relative to that legacy.”

Now, the Eastman Museum will have what he called, “a wonderful entrance that complements the features of the house, the archives, the exhibit area and above all, the gardens with the new colonnade.”

ESL—originally Eastman Savings & Loan—Federal Credit Union purchased the one million dolllar naming rights to what will be the ESL Federal Credit Union Pavilion within the new Visitor Center. ESL President and Chief Executive Officer Faheem Masood led ESL, founded by George Eastman for his employees in 1920, in celebrating the museum’s “evolution as a local arts and culture institution as [ESL] evolve[s] as a financial institution into our second century of serving the community.” Honored to support the building of a new Visitor Center, Masood declared it “a testament to the important role that arts and culture play in our community.”

Monroe County Executive Adam Bello proclaimed the project “a great example of private and public collaboration in our community.” He recalled showing entrepreneurs the original incorporation papers for Eastman Kodak. “Over 100 years ago, George Eastman, Henry Strong and other Rochester luminaries…came… with an idea, as well, and their idea revolutionized the world…changed the world as we know it. If we can take that next generation and inspire them to do something great, then we are doing our job.”

Finally, speaking on behalf of Mayor Lovely Warren, James Smith, Deputy Mayor of the City of Rochester, applauded the new Visitor Center, thanking partners at City Hall as well as the Governor and others. Smith’s father, a Rochester journeyman photoengraver for 40 years, made Smith what he calls, “a product of Rochester’s imaging economy,” giving the George Eastman Museum “has a very special place” in his heart.

Praising the museum as “an homage to all the men and women in this community who helped make those images happen,” Smith reaffirmed the necessity of investing in arts and cultural institutions which “are an industry in and of themselves.” He said, “The Mayor and I and everyone at City Hall are just so grateful when we can announce something like this because it will mean so much to folks like my family.”

Check out this week’s other hometown stories

• The Gift of Glasses