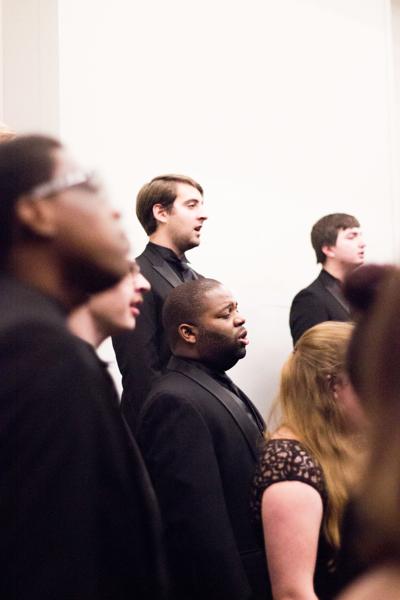 The program, “Through the Storm, Lead Me to the Light,” features diverse choral repertoire

BATAVIA, NY –On Thursday, December 16, The Roberts Chorale will perform its first solo concert of the New Year. The concert is free of charge and open to the public and will begin at 7:00 pm. It will take place at the First Presbyterian Church of Batavia which is located at 300 East Main Street. Seating is by general admission; doors will open at 6:45. There will be a reception following the performance.

The Roberts Chorale is Roberts Wesleyan College’s premier vocal ensemble, devoted to the study and performance of high-quality choral music from diverse styles, musical eras, languages, and cultures. Bonded by a passion for compelling musical performance and a desire for meaningful Christian fellowship, the Chorale is an ensemble of talented singer-artists who combine their gifts to cultivate excellence in choral singing. For its 2019–2020 season, it is comprised of 41 students representing 18 academic majors at Roberts Wesleyan College, four home states, and three home countries.

The day after this concert, the Chorale departs on a performance tour of Florida, with concerts throughout the following week in Lakeland, Tallahassee, Jacksonville, Fort Lauderdale, and Marco Island. In the past two years, the choir, directed by Dr. Adam Potter, has toured the East Coast and returned from France in May, performing to large and enthusiastic audiences in Paris and Normandy.

Each year, the Chorale’s musical programming and extra-musical activities are structured around a unifying theme. This year, the theme—and that of the tour—is perseverance. In devotionals and other spiritual life activities incorporated into the ensemble, they are reflecting on James 1:12: “Blessed is the one who perseveres under trial because, having stood the test, that person will receive the crown of life that the Lord has promised to those who love him.”

The title of the Florida tour program is “Through the Storm … Lead Me to the Light.” These words are borrowed from the central piece on the program, Thomas Dorsey’s “Precious Lord,” and the repertoire is structured around the storm, lead, and light themes. The first set of the concert is called “The Rain Awakens” and features storm music that represents the elements of nature. During the second set, “Turn Darkness Into Light,” the storm fades away and the theme of light begins to emerge through. The Chorale returns to the stage for its third set: “Lead Me Home,” during which the music leads the audience not only to physical light but to the Light of the world, Jesus Christ. Finally, in the final set, “The Star of My Life Is Jesus,” the Chorale sings of the One who is the culmination of every piece that preceded it.

Although thematically unified, the program is stylistically eclectic, including music from Renaissance Mexico, Classic Austria, and also music guaranteed to delight audiences, including new music by American composers, a folk song arrangement, gospel music, spirituals, and even a choral arrangement of a contemporary Christian ballad from the 1970s.

Through Potter’s philosophy of “relentless positivity,” the choir has been able to bring the concert together with the goal of sharing their music and their faith with the Batavia community in preparation for expanding their reach while on tour in Florida the next week.