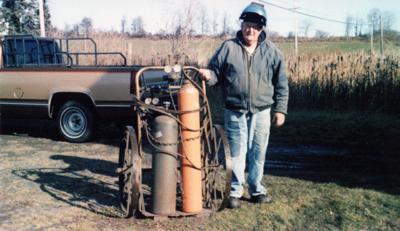 We lived at 43 North Main Street in Honeoye Falls.  The house is still there. Next door lived and old man who on the 4th of July would bring out a portable crate with his rocket launcher on it.  He could send a portable rocket across the street and over the American Legion Hall. There were no fireworks allowed (or available) after 1941.

In 1942, after World War II started, we began working for the local farmers who would send a truck by to pick us up and take us to the field where we would be working. My first job was for the Moses Nursery in Lima, NY.  We picked up gladiola bulbs, and he paid us $.45 an hour.  We picked up potatoes and picked up and shucked corn.  We were paid 10 cents per bushel.  For a full day’s work on Saturday, you could make $5.00.

We picked corn for K.C. Livermore, large potatoes for Chauney VanVoorhis, and at the Harwood Martin farm, we had to detassel four rows of corn and leave the tassels on two. The farmers always paid us at day’s end in cash.

The Birds-Eye Snyder Factory in Avon, NY, hired a team of ten of us from the high school.  They also hired the school coach, Lou Basil, to be our leader. We got this work because the parent of one of the students was the Vice-President at Birds-Eye.

Our principal had a Victory (produce) Garden.  My brothers and a few other kids worked there.  We weeded onions and carrots.  My oldest brother and I and the other big kids were paid 30 cents an hour.  My brother, Bob, who was a bit smaller but worked just as hard, was paid 25 cents an hour.

In the year 1942, after the war started, I collected one ton of scrap iron from Honeoye Creek. I received a “V” for Victory with the number 42 on it from my school. My mother sewed it on a sweater for me.

We also collected cardboard and newspapers and sold them to the scrap men for three cents per pound.  We collected milkweed pods.  The filmy matter was used in life vests and jackets to keep flight crews and Navy men afloat.

When I was 9 years old, my father taught me to weld.  In 1946, my father was contracted to modify water tanks in a number of schools in Western New York. On our first day, after we finished the work, we returned home by way of Dansville Hill.

My father was worried about getting down.  We had an old International pickup truck with mechanical breaks.  We started down the hill. Dad shut the engine off and put the truck in low gear. By the time we got to the bottom, we were going 50 mile per hour.  Wow! Whew!

Entertainment was going to Rochester Junction to watch the Lehigh Valley’s Black Diamond Train. We barely had a radio –no T.V. for us until 1949 or 1950.

There were a few stations available but not 24-hour programming like we have today.  Listening to the radio was a daily ritual, especially at dinnertime – Jack Armstrong (The All-American Boy), Captain Midnight (send a box top in for the secret code ring), Terry and the Pirates, the Green Hornet, and Gang Buster and Inner Sanctum (What mystery lies behind the squeaky door?).

We went to an air show at the Woodward Airport, a private family owned airport owned by the owners of the Jell-O factory in LeRoy. The Circular Hill Road jalopy races were also held near LeRoy.  This was a natural amphitheater – people sat on the grassy hillside.

Summer days were spent down at the creek swimming, turning rocks over for bait and sometimes fishing. In the woods behind the house, we had a rope swing in a walnut tree.  On a rainy day, we would make a dam in the culvert in front of the house. Evenings, we might get enough kids together to play softball, tag or capture the flag in the park downtown.

Winter days [were spent] ice skating on the creek, skiing down a hill or in the street.  Maplewood Avenue was a side street and nice hill to use our sleds on.  I remember once skating on the road surface as black ice made it possible.

Brother Bob and I also put the chairs up for the Saturday night band concert at the Harry Allen Park.  Uncle Alex would give us each 50 cents.  We would go to the movies for 18 cents and buy a soda after the movie for 15 cents. Then, we would go back, put the chairs away, turn out the lights and lock the door.

In a barn on our property, my dad repaired farm equipment and made plow points for farms. We used that barn for a carnival we put on one time. There was a haunted house, costume show and games. Many kids came. Some kids later told me that they were disappointed we only did it once. The house at 43 North Main Street and the barn were great—the greatest—places to be during those years.

Read one of this week’s other hometown stories: