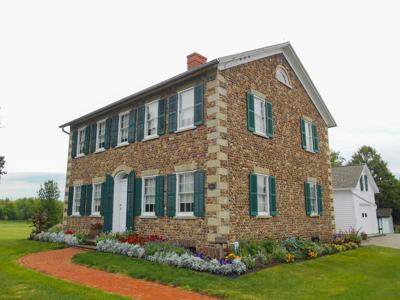 If the Tinker Nature Park were a person, it would have more characters than John LeCarre’s famous spy novel of a similar name. In addition to trails to be walked and Civil War history that was once re-enacted on part of its 300 acres, the Nature Park offers events and outings good for the body, the mind and the soul.

Tinker - The Tinker Family arrived in this area in 1812 and settled on 40 acres in what was then the Town of Pittsford. Henrietta became its own town in 1818. James and Rebecca Tinker came from Connecticut, and brought with them six children, eventually having two more. Following the opening of the Erie Canal, the farm eventually grew to over 300 acres, and the family prospered.

The Hansen Nature Center, where classes are held, was made possible through a donation from local businessman and Henrietta resident Henry Hansen. It opened in 1995 and thanks to his generosity once again, expanded to open the exhibit area in 1998.

Nearly five hundred years ago, Shakespeare acknowledged that “one touch of nature makes the whole world kin.”  You’ll feel that inclusion, that kinship, as you view the seasonal nature exhibits at the Hansen Nature Center. Two of the most popular are the indoor honeybee hive and the rescued birds: Pudge, Lola and Felix. Open year round, the Center’s classroom holds seasonal programming with topics that include gardening, beekeeping, yoga, local wildlife, and more.

Trailer - “Trailer” is sometimes used as a verb, meaning to transport something. You’ll likely find your soul transported by the ¾ mile nature trail that the Tinker Nature Park offers visitors. The 1/2-mile perimeter trail includes fitness and exercise stations with instructional signage. After all, it’s been said that “to walk in nature is to witness a thousand miracles.”

Soldier - For fifteen years, starting in 2003, Civil War reenactments were held at the Nature Center to bring more awareness to the house museum. The reenactments were replaced by the Wild Tinker Program. Wild Tinker provides live animal presentations throughout the day, including featured creatures from the Seneca Park Zoo, from Wild Wings, and from the Hawk Creek Bald Eagle program.

Spy - Even an amateur sleuth will be able to spy any number of activities to enjoy. Guided tours will take you through the fields, marshes, forests, and across the pond to explore and learn.

For those who believe, as Tinker-ites do, that “we are guests in plant and wildlife communities,” the Nature Center preserves those communities so this and future generations may enjoy them. You’ll learn about plants, animals, and other organisms of the habitats as well as identify different species throughout the seasons based on sight, their calls, and other signs they leave behind.

Community Enricher - Another persona residing at Tinker is the non-profit group The Friends of Tinker Nature Park. They co-sponsor community events with the Town of Henrietta. All events are free and open to the public.  In addition, Tinker Nature Park hosts several special events including Wild Tinker, the Earth Day and Arbor Day Celebration, the Honey Harvest Festival, and the very popular summer Art and Garden Party! Currently the event schedule stretches from February to December with breaks only in November and March, depending on Easter's date.

Patron of the Arts - The Art & Garden Party, which will be held on June 27th of this year, will create an immersive art exposition using pieces from local artists. The artwork will be found by amateur spies among the existing displays of the house.  The curator-character of yet another Tinker persona intermingles large and small pieces to show visitors the rooms of the house and to encourage them to search for the artwork. Pieces that had been in the house's collection for years have been given new context, and many visitors are now aware of details in the hearths, desks, and small accessories that previously went unnoticed.

Historian & Agricultural Archivist - Another metaphoric personality residing at Tinker is the Farm Museum, which charts the growth of agriculture in Western New York from subsistence to commercial farming. Visitors step back into history and learn how the Erie Canal forever changed the face of farming in New York State. The museum has an extensive collection of farm implements that reflects the modernization of farming through the years.

Memory Keeper - Families interested in memorializing those who have passed can purchase memorial bricks on the Tinker property. This Tinker gesture finds the bricks on the sidewalk leading to the labyrinth, which was built in memory of David Dimeo, a Boy Scout leader. Tinker Nature Center and all the metaphorical personages who represent it are truly a many-splendored rainbow of good fortune.

Enjoy this article? Check out our other Hometown Stories: