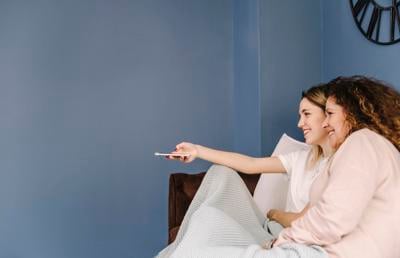 This sweet 1940’s musical follows an Iowa farm family’s journey to their state fair. With melodies like “It Might as Well be Spring,” “It’s a Grand Night for Singing” and “Isn’t It Kind of Fun?,” this lighthearted story is filled with romance and nostalgia and features Jeanne Crane, Dana Andrews and Dick Haymes.

This 1950’s musical, set about 100 years earlier, features film greats Jane Powell and Howard Keel. With fun songs like “Goin’ Co’tin,’” “Sobbin’ Women” and “Spring Spring Spring,” this film will keep you tapping your toes. Note: While the brothers believe they are romantically carrying off their sweethearts, Milly (Jane Powell) makes it clear that kidnapping is never acceptable.

Starring film legend, Gene Kelly, alongside fellow greats Van Johnson and Cyd Charisse, this 1950’s “magical” film is a romantic blend of fantasy and drama. As one would expect, the dancing is beautiful and captivating, and songs like “The Heather on the Hill,” “Almost Like Being in Love,” and “I’ll Go Home with Bonnie Jean” still delight audiences today.

Starring Aileen Quinn, Albert Finney and a remarkable performance by Carol Burnett, this 1980’s musical quickly became a classic. It’s story of an orphan girl who finally finds a family will warm your heart as songs like “It’s a Hard Knock Life,” “Tomorrow” and “Easy Street” get you singing along.

Starring Ginger Rogers, Walter Pidgeon, Celeste Holm and Leslie Ann Warren in her title role debut, this beautifully told version of a classic fairytale delights with songs like “In my Own Little Corner,”  “Impossible; It’s Possible,” and “Do I Love You Because You’re Beautiful?”

Featuring Marlon Brando, Jean Simmons, Frank Sinatra, cinema giants Brando and Sinatra give an enchanting performance as gamblers, particularly Brando who finds himself risking it all for love.

A patriotic musical following the life of prolific, real-life songwriter George M. Cohan, James Cagney (Cohan) sings and dances through song after song with fellow stars Joan Leslie, Walter Huston, and Richard Whorf. Watch it now or save it for the 4th of July!